Gold Has Beat The U.S. Dollar For Nearly 50 Years - Degussa

Gold prices are trading near a three-month high as the U.S. dollar falls from its recent lofty heights. According to one precious metals firm, the recent trend is just one part of a bigger picture that supports the yellow metal’s long-term uptrend.

In the latest market report, analysts at Degussa said that from 1970 to 2018 gold prices in real-terms, which strips out inflation, have risen on average 5.9% a year; meanwhile looking at the U.S. dollar, its purchasing power declined by 85%. The analysts also looked at U.S. dollars held in a bank account with three-month maturity. The results showed that taking into account purchasing power, the return on those U.S. dollars was 4.6%, they said. 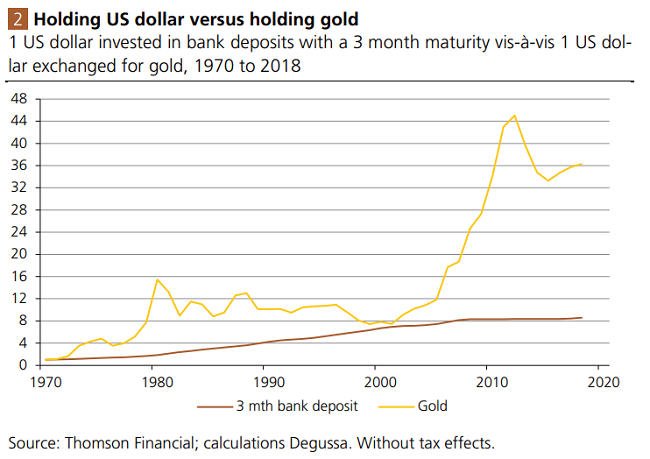 “So yes, gold has clearly outshined the US dollar in the long-term. In contrast to the US dollar, gold has not only proven its store of wealth function, it has also managed to raise its purchasing power over time,” the analysts said in the report.

The firm noted that this historical analysis could prove to be a roadmap for the futures as it looks like there is no end in sight to global central bank loose monetary policy and negative bond yields.

“This will turn out to be a big support for gold, as the opportunity costs for holding gold decline; in the case of negative real interest rate there is actually a reward of holding gold,” the firm said.

Degussa added that the U.S. dollar is particularly at risk, as it is the world’s reserve currency in an environment where global debt has reached crisis levels.

“…The world’s monetary system, which is built on the US dollar, has become quite vulnerable to any further financial or economic shock,” the analysts said. “The very high debt load in many countries could make the economies come crashing down if and when growth and employment falter. The risk profile is clearly skewed towards a continuation of the debasement of unbacked paper currencies.”

According to some analysts, the gold market is clearly benefiting from renewed safe-haven demand, as equities struggle to find momentum in an environment of falling economic growth forecasts and rising geopolitical uncertainty. The demand for safe-havens has further inverted the U.S. three-month/10-year yield curve. The 10-year bond yield continues to hover near a two-year low.

Along with falling bond yields, markets continue to price in aggressive interest rate cuts from the Federal Reserve. Markets see a 70% chance that the U.S. central bank will cut interest rates by July. Markets are pricing in three rate cuts by the end of the year.