Just So Bullish for Gold

That's the highest such rate since March 2012. Led by higher gasoline, rent and health care costs, consumer prices have now advanced for the sixth straight month.

In addition, January is the second straight month for inflation to be above the Federal Reserve's target of 2%.

So a March rate hike now looks all but imminent. Many economists – including the Goldman Sachs economists I had the pleasure to hear speak last month – expect to see at least three such hikes this year alone.

Gold responded accordingly, closing above $1240 for the first time since soon after the November election. Below you can see the gold price charted against the inflation-adjusted 10-year Treasury yield, which is now in subzero territory. 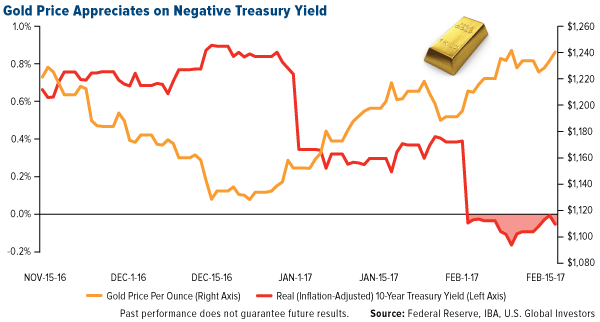 The question I have is: Why would an investor deliberately choose to lose money? But that's precisely what's happening now with inflation where it is.

These were among some of the topics addressed by former Fed Chair Alan Greenspan, who spoke with the World Gold Council (WGC) for the winter edition of its "Gold Investor".

"Significant increases in inflation will ultimately increase the price of gold," Greenspan said. "Investment in gold now is insurance. It's not for short-term gain, but for long-term protection."

He also reiterated his view, which I share, that gold is much more than just a metal but a currency:

"I view gold as the primary global currency. It is the only currency, along with silver, that does not require a counterparty signature. Gold, however, has always been far more valuable per ounce than silver.

"No one refuses gold as payment to discharge an obligation. Credit instruments and fiat currency depend on the credit worthiness of a counterparty. Gold, along with silver, is one of the only currencies that has an intrinsic value. It has always been that way. No one questions its value, and it has always been a valuable commodity, first coined in Asia Minor in 600 BC."

Although major stock indices continue to hit fresh all-time highs on hopes of tax reform and fiscal stimulus, it's important to temper the exuberance with a little prudence.

The bull market, currently in its eighth year, is facing some significant geopolitical and macroeconomic uncertainty, and we could be getting late in the economic cycle. This makes gold's investment case even more attractive.

For the 10-year period, the yellow metal has shown an inverse correlation to risk assets such as stocks and high-yield bonds. It might be time to ensure that your portfolio has my recommended 10% in gold – that includes 5% in gold coins and jewelry, the other 5% in quality gold equities and mutual funds.

The long-term investment case for gold looks just as compelling following bullish reports last week from PricewaterhouseCoopers (PwC) and Morgan Stanley. China and India are the world's top two consumers of gold, and both countries are expected to make huge economic gains in the next few decades. This is likely to boost gold demand even more, which has a high correlation with discretionary income growth.

China alone consumed approximately 2,000 metric tonnes in 2016, or roughly 60% of all the new gold that was mined during the year, according to veteran mining commentator Lawrie Williams, who based his estimates on calculations made by BullionStar's Koos Jansen.

The 2,000 metric tonnes is a much higher figure than what analysts and the media have been telling us, but I've always suspected China's annual consumption to run higher than "official" numbers.

According to PwC's models, China and India should become the world's number one and number two largest economies by 2050 based on purchasing power parity (PPP). China, of course, is already the largest economy by that measure, but PwC sees the Asian giant surpassing the US economy on an absolute basis by as early as 2030. 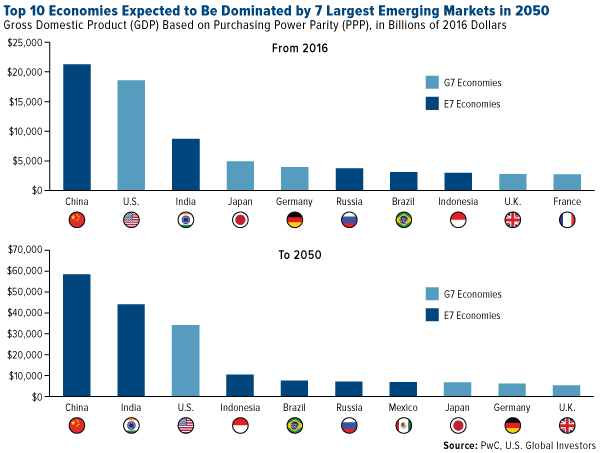 As for India, it "currently comprises 7% of world GDP at PPP, which we project to rise steadily to over 15% by 2050," PwC writes. "This is a remarkable increase of 8 percentage points, gaining the most ground of any of the countries we modeled."

I think it's also worth highlighting Indonesia, which is expected to replace Japan as the fourth-largest economy by midcentury. E7 economies, in fact, could end up dominating the top 10, with Mexico moving up to number seven and France dropping off. You can see the full list on PwC's site.

Then there's Morgan Stanley's 118-page report, "Why we are bullish on China".

The investment bank sees a number of dramatic changes over the coming years, the most significant being China's transition from a middle-income nation to a prosperous, high-income nation sometime between 2024 and 2027.

The high-income threshold is a gross national income (GNI) of around $12,500 per capita. So this would make China one of only three countries with populations over 20 million that have managed to accomplish this feat in the past 30 years, the other two being South Korea and Poland. 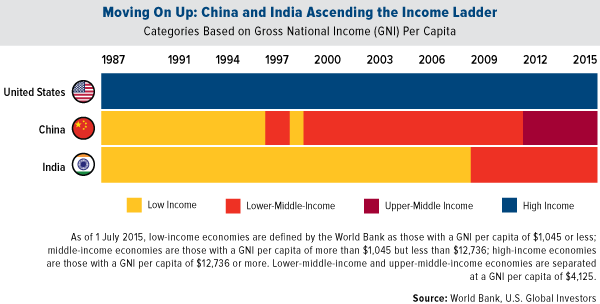 This trajectory is supported by a number of expectations, including, most importantly, Morgan Stanley's confidence that China will manage to avoid a debt-related financial crisis, as some investors might now believe is forthcoming.

The bank's view is that the Chinese government will successfully provide "adequate policy buffers and deft management of the policy cycle" to ensure the growth of per capita incomes.

Other key transitions will additionally need to take place for the country to reach high-income status by 2027, including transitioning from a high investment economic model to high consumption and implementing meaningful state-owned enterprise reform.

Although China is currently transitioning from a manufacturing economy to one that's focused on consumption and services, the country will also need to emphasize high value-added manufacturing. 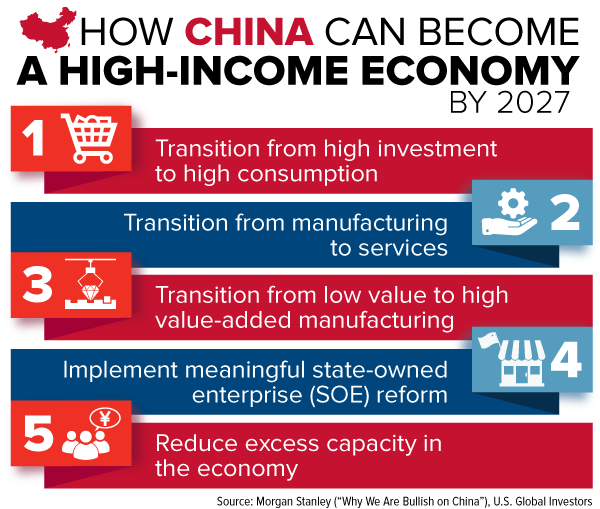 In addition, since President Donald Trump has officially withdrawn the US from the Trans-Pacific Partnership (TPP), China could very well use this as an opportunity to take the lead in global trade, Morgan Stanley writes.

This view aligns with comments I've previously made. China is already reportedly weighing its options with two alternative free-trade agreements (FTAs), one that includes the US (the Free Trade Area of the Asia Pacific) and one that does not (the Regional Comprehensive Economic Partnership). It's probably safe to say, however, that given Trump's opposition to FTAs, trade negotiations involving the US are unlikely to happen anytime soon.

Taken together, this is all good news for gold. Again, when incomes rise in China and India, gold demand has historically benefited.

But it also makes China a compelling place to invest in. And yet investors have tended to be shy, underweighting the country for at least a decade in relation to the broader emerging markets universe. 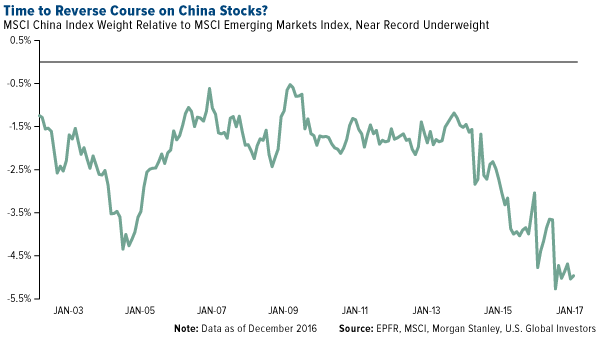 This, despite the fact that China has largely outperformed emerging markets for the last 15 years.

According to Morgan Stanley, the MSCI China Index has delivered a compound annual growth rate (CAGR) of 13% for the 15-year period, versus the MSCI Emerging Markets Index's CAGR of 10% over the same period.